Us inner Northerner’s loaded up the SUV’s and had a precarious trip to the inner East which this keen eye observed was smack back in Frydenberg country where our illustrious night watchman Treasurer resides.

Anywho.. onto the footy.

The sun was shining, the birds were tweeting and the players were up against it from the first bounce.

The Kew Comets came belting out of the blocks with a 4 goal 2 first quarter blast which had our lads reeling in their socks. A hard running, well drilled juggernaut that have played the last 4 seasons together meant business and to our lads credit there was no head dropping against a higher scoring opponent.

The end result on the scoreboard whilst looking grim did not dampen the boys who kept trying right to the end with a bone crunching tackle landed in the last that made my teeth rattle in the grandstands!!

Highlight of the day was a BANGER goal from the pocket from Connor in the third.

A big call out for Michael, Hayden and Darcy who busted a gut all day and earned the 3/4 time snakes.

Stay tuned for more updates and a coaches wrap up. 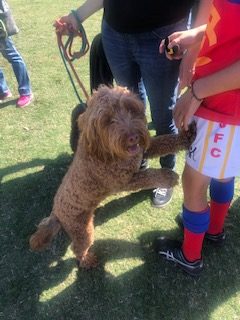